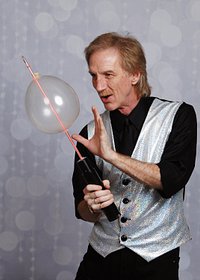 The kids call him, "Rodney The Magician"... The parents just call him!

Since March of 1985, Rodney has been living off of his Magic!

Nashville Magician Rodney Kelley started performing Magic in 4th grade. Won 2nd place in the 8th grade talent show. In college he auditioned for several theme parks, one of which was Opryland USA in Nashville, Tennessee. The day after the Opryland Theme Park audition, Rodney was auditioning for Disney in Orlando, Florida when he received a call to come back to Nashville. Opryland Theme Park offered him his own theater in March 1985. (and Disney offered him a spot in their Magic Shop on that day also!)

Rodney was still in college in Ohio so he had to drive from Cincinnati to Nashville to work weekends at Opryland Theme Park and finally, after college Rodney moved to Nashville.

Immediately after the closing of Opryland, Rodney was invited to perform on a USO Tour going to 5 countries spanning an 8 week time period in Europe. This tour would go to Italy, Spain, Portugal, Greece and Turkey and would be entertainment for Military Families serving abroad. After the success of that tour Rodney was asked to go on 11 more tours overseas entertaining the military. Rodney is still, "on call" and may be going on another tour, if and when the Pentagon calls again.

Currently, Rodney is still in Nashville, Tennessee performing for private events such as birthdays, church events, mall shows and any event where there is an audience ready to have fun!

If you have an event, and are in need of Magical Entertainment, call Rodney